From Hell To Helsinki – More Reviews

WHAT A REFRESHING ALBUM! I must confess
that I am overwhelmed by your Great Great work! The richness of writing and musical diversity give your albums an impression of grand style and of perfection. All the songs are an unusual boldness and richness. You turn what is elementary into something organic, original, immaculate…With fragility and tactfulness, beauty and sensitivity, delicaty and genuineness, you infuse your album with a soul and modesty that can only make it extremely lovable.
Your records are not a jewels, but a jewely case, a superb and wonderful jewelly case,for the TRUE JEWEL IS YOUR HEART BEATING INSIDE THE CENTER!! GIANTESS.

Being the Dj there,I am also active in the drafting of Country Music Gazette.I would be very happy if I could release for publishing your interview through the Email.

DeLeon’s album title doesn’t refer to Hell, Norway, but a nightmare journey to Finland on her 2002 European tour, at the end of which she did a live show, accompanied only by fiddler John Permenter, on YLE Radio, Helsinki, and liked the ten cuts so much she put them on CD, plus another recorded in her living room. She’s since learned that less really is more, getting a better response to this freebie bare-bones album than to her high dollar studio/guest stars debut Outlaws & Lovers, which she put out simply as Bianca (Texas trivia; she’s the subject of David Rodriguez’s Bianca Smiles.) Apart from the audience favorite Don’t You Hate It When Your Date Gets Shot?, which she’d kinda like to get rid of, this is all new Borderland material from one of the few people who can be described as a Texas singer-songwriter, not just a singer-songwriter from Texas. — John Conquest, 3rd COAST MUSIC, November 2002

For me, songwriters fall into a few different categories. There are the commercial writers, and we need them. There are those people who write to say ‘hey, look at me, this is what happened, and I’m going to tell you about it, minute by painful minute.’ There are a few other categories, but Bianca De Leon falls into one of my favorite slots. She is one of the best at taking a story, be it an afternoon happening, or someone’s entire life and putting it in a song with a huge emphasis on art. Bianca is one of the most artistic writers that I know. So many writers have forgotten that ‘artistic’ is still a viable writing category and this is still an art. Much like one can look at a Monet several times before seeing the painter’s full message, Bianca’s songs are sometimes so artfully done that you might need another listen or even an explanation before you get the entire underlying story. A good song can stand on it’s own without any explanation, but an artistic song can stand on it’s own and still have a larger story that led to the composition. It is evident that the time Bianca spent around Townes Van Zandt influenced her style of laying down a song. There are times I wonder just how much Townes may have learned from Bianca as well. The two have a similar ‘flavor’ to some of their compositions. I’ve only met a handful of writers who truly write from their soul instead of their brains, Townes, Hayes Carl, and Bianca top the list. “Live from Hell to Helsinki” was recorded in Finland, but it’s Texan all the way. “The Long Slow Decline of Carmelita” is a sad tale of a life that just couldn’t catch a break, and indeed is as sad as the story of “Caroline” in Townes Van Zandt’s “Tecumsah Valley”. “Six Pack of Misery” takes the traditional road of a woman scorned by an abusive partner by making good use of a Colt 45, the gun, not the malt liquor. “Outlaws & Lovers” is another example of Bianca’s road tested material and contains a Townes Van Zandt cover ‘Waitin’ Round To Die’. Joe Ely appears on the disk and delivers an excellent performance on ‘Carlos’, while Teye’s flamenco guitar is breathtaking. Bottom line, I’ve known Bianca for years and I’ve never know her to be anything other than a true Texas troubadour. I’m being out on a limb here to say that when we’ve all passed on to the other since, we will be able to look down and see her name added to music’s most impressive lineup, the Texas Music Hall of Fame. If you’re talking about Texas music and you don’t find yourself taking about Bianca De Leon, you’re in the wrong conversation.
—MY TEXAS MUSIC , March 2003 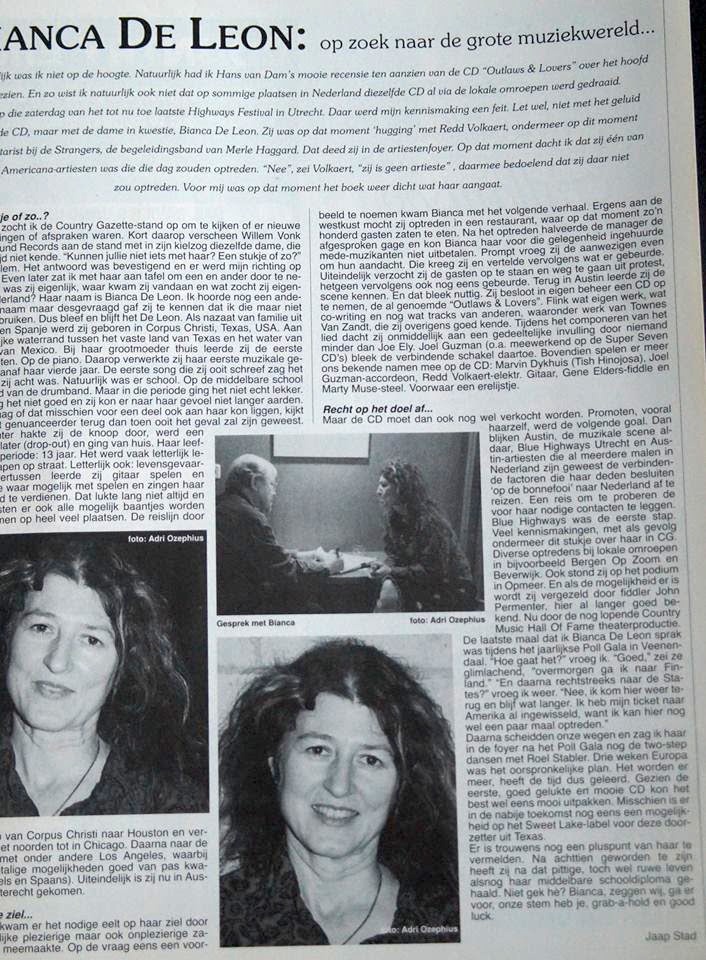