It’s fun to set a cross-country car journey to the music of the regions you pass through. John Prine should be played on a loop as you pass through Illinois and Western Kentucky, with “Paradise” cranked in Muhlenburg County. Western Tennessee slides by nicely with the Sun Box for accompamiment, while Mississippi and Lousisiana are chock-full of landscapes that cry for blues and zydeco, respectively. In Texas, George Jones suits the Big Thicket and Beaumont; Willie, the Hill Country; and (who else but) any or all of the Flatlanders are as Panhandle as a giant beefsteak. Former Houstoniamn and part-time Galvestonian Bianca De Leon aims to stake her claim on the Brush Country south of Corpus Christi and San Antonio. Her debut CD, Outlaws & Lovers, combines Spanish, and English lyrics and Mexican and Texan musical styles into a dish that is as South Texan as huevos rancheros. De Leon. who grew up near Corpus Christi, was initiated by her aunt into the fine art of tequila smuggling as a preteen, and this authenticity shows in the disc. There are also guest appearances by Redd Volkhaert, Joe Ely, Teye and Joel Guzman, among others, who enliven one of 2001’s most exciting, well-conceived Texas debuts. —John Nova Lomax, Houston Press
Bianca “Outlaws and Lovers” Not that Bianca De Leon needs any validation as a singer of Tex-Mex songs. But, It doesn’t hurt that she’s joined on her new disc by Joe Ely. And, there she is (in) and old photo on the back of the c.d. being hugged by an open-shirted Townes Van Zandt. Even without those endorsements, Bianca is about as authentic a border-line crooner as you can get. She sings the lonely “Si Me Recuerdas”, in Spanish, and the gut string guitars, accordions, and slide guitars make every song leap and dance. Bianca’s dark voice is deceptively plain. There is a power in her vocals that gathers over the course of these songs like a West Texas thunder storm. Still it’s a voice that never overpowers a good story, especially in songs like “Ballad of Dylan Thompson” and “Merle” and in her aching run through Van Zandt’s “Waiting Round To Die”. Her duet with Ely on “Carlos” is, not surprisingly, the finest cut of the collection. It’s a long, rambling cautionary tale about pride, greed, revenge and betrayal. In other words, the classic border ballad. — Billings Montana Gazette 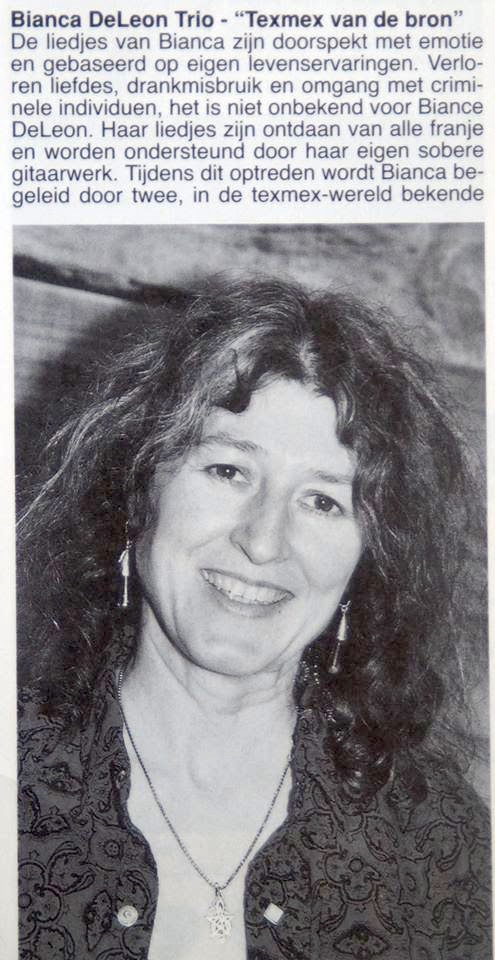